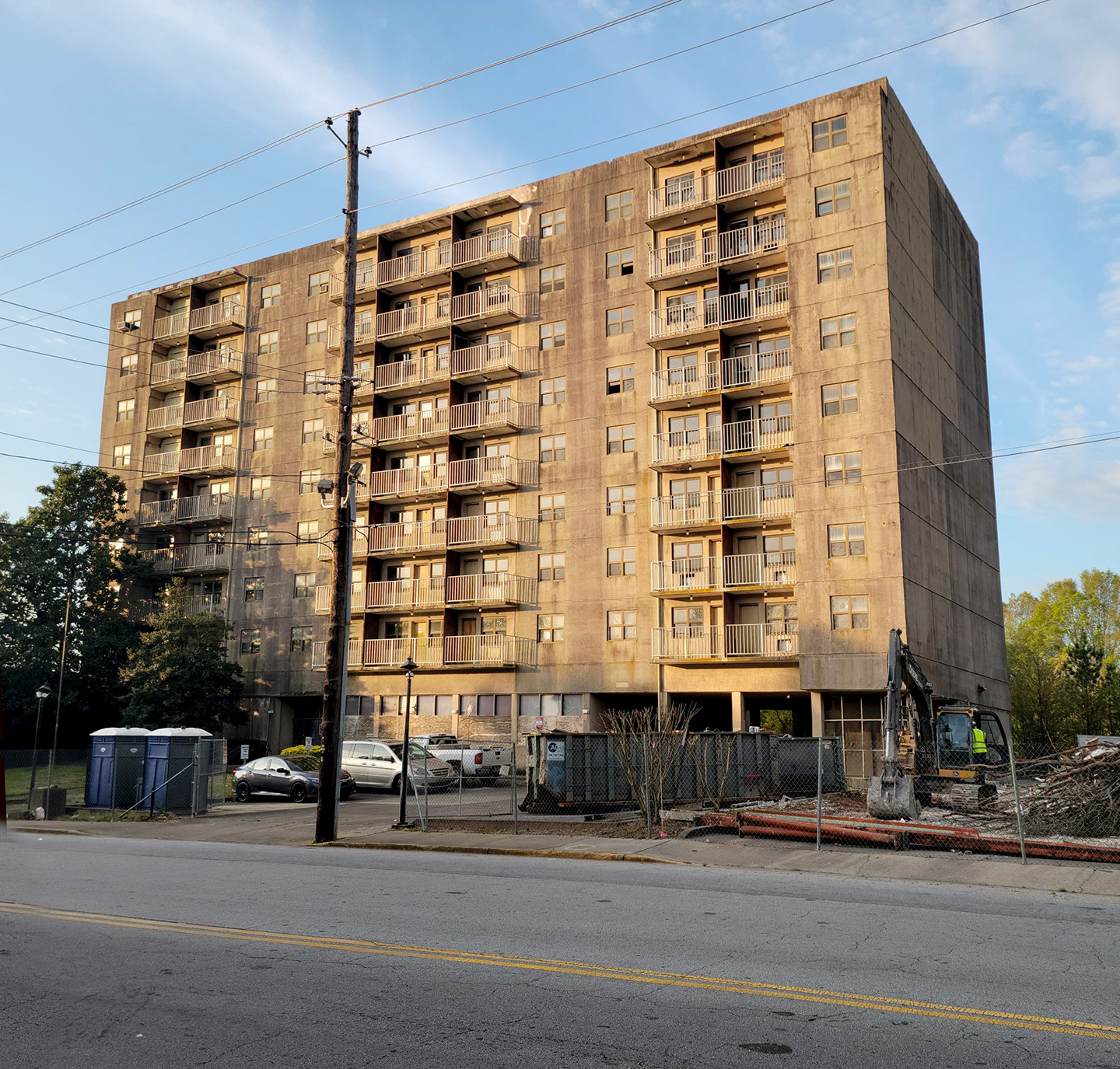 For nine stories in East Point, a bright new chapter has begun.

The start of construction at 1600 Connolly Drive officially marks the beginning of Aya Tower: a full renovation that will deliver color and vibrancy to the existing building as well as brand new affordable homes.

In a partnership with the Housing Authority of the City of East Point, Georgia (EPHA), affordable housing developer Vecino Group will lead all development on the project. The Vecino Group collaborated with the EHPA on the right plan in order to revitalize the existing, 48-year-old vacant structure to best serve the needs of the city of East Point.

“The Housing Authority is delighted to partner with the Vecino Group on this important project.To be able to turn around blighted properties—transform them into something positive—is ideal. Granted, not every situation will allow for such a solution, but with Nelms, we were able to achieve it,” said Michael Spann, Executive Director of East Point Housing Authority.

Built in 1974 as “Nelms House”, the existing high-rise had started to decline by the late 1990s and eventually closed in  2004. In the years since, many plans for the property’s redevelopment had been proposed only to stall—to the point where demolishing the property outright was part of the discussion for a period. But EPHA kept options open when considering the best path forward—including a rehab, if possible—which made the Vecino Group an ideal partner. “We have felt there was potential for this building for years. In our experience, the greater opportunity is to invest the time and resources into revitalizing a structure as opposed to destroying it” said Sharon D. Guest, Vecino Group President of Affordable Housing. “In the case of Nelms House, the building structure was in remarkably good condition. It made sense to start there.”

The total development cost for Aya Tower is approximately $24MM. Financing is made possible through an allocation of 4% federal Low-Income Housing Tax Credits (LIHTC) from the Georgia Department of Community Affairs (DCA), and an allocation of Tax-Exempt Bonds from the Housing Authority of the City of East Point, Georgia. Federal and state equity in the amount of $16.5MM is provided by National Affordable Housing Trust and Cedar Rapids Bank and Trust is providing both the $18.4MM construction and $7.3MM permanent loans. Construction is scheduled to be completed by late Summer 2023.

“We’re excited to work with EPHA and the City of East Point to breathe life and energy back into this building—not just for its residents, but the surrounding community as well,” said Guest. “as Aya Tower, this property has a lot yet to offer.”