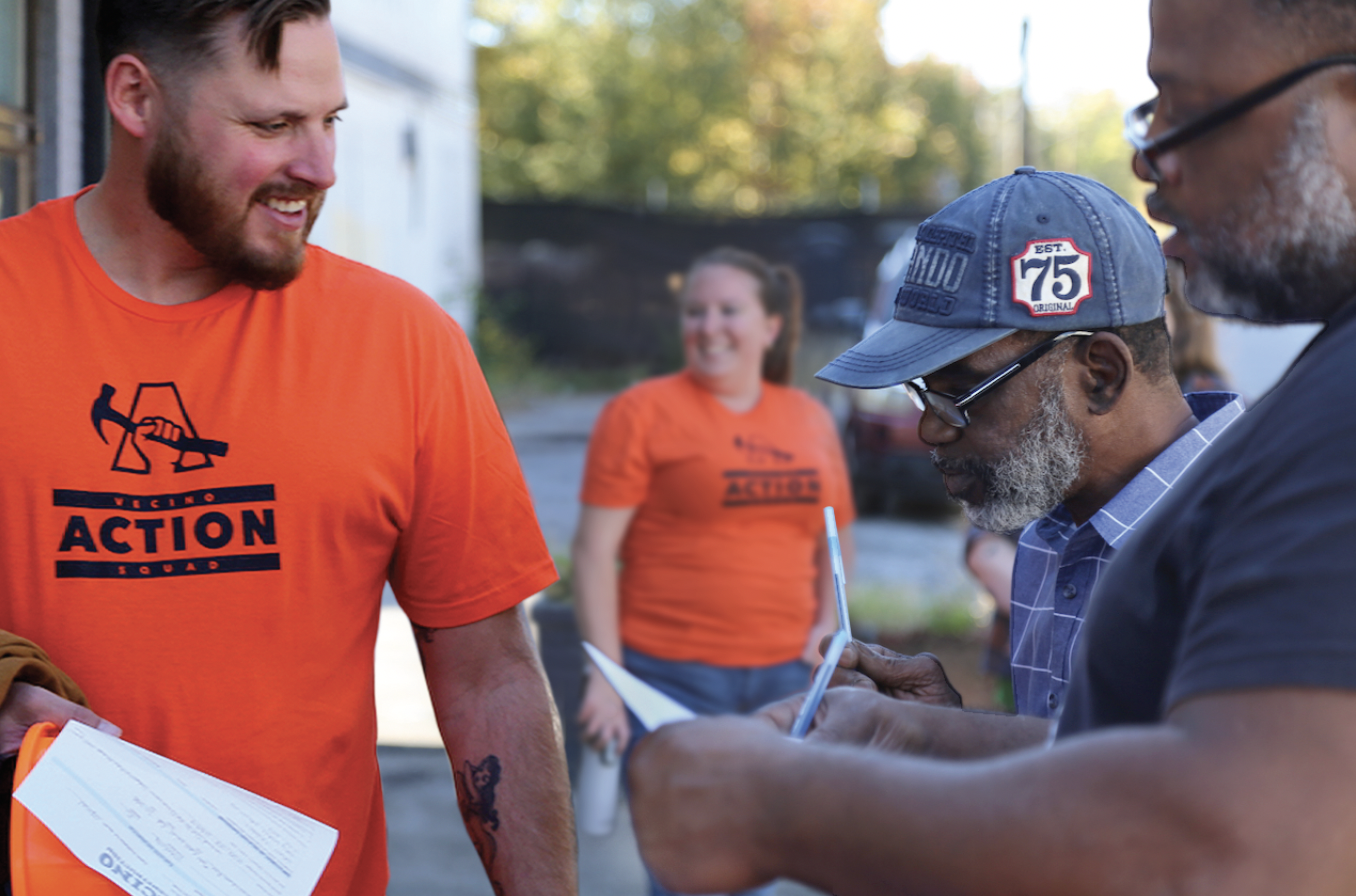 It’s early afternoon at a busy intersection in East Point, Georgia where a modest table and two chairs are accompanied by a standing sign that states BUILD YOUR FUTURE.  It’s a nearly cloudless Autumn day, yet this pop-up job fair sits mostly in the shade of the 9-story building being redeveloped behind it. The sound of the MARTA train overhead creates a gentle, mechanized rhythm as Heather Bradley-Geary, Director of Supportive Housing for the Vecino Group, sits at the table with her laptop—ready to sign up locals for the ACTION Squad.

A gray SUV rolls to a stop at the corner. From inside, a voice calls, “What do you got going on?”

“Hey! We’re hiring entry-level construction positions for this building!” says Bradley-Geary, gesturing behind her to the building—the tallest structure in all of East Point. Formerly known as Nelms House, the building will reopen in 2023 as Aya Tower, providing 88 units of affordable housing through a partnership between the East Point Housing Authority and the Vecino Group.

“I used to be in the trades—I’ll swing back around and sign up!”

“Great!”, Heather calls back as the light turns green and Stan, the driver and soon-to-be applicant, rounds the corner to make his way back to meet with Heather and the Vecino team.

Launched last year through Vecino Construction, ACTION (Advancing Construction Trades In Our Neighborhoods) is a program that establishes opportunities for residents within Vecino communities and their surrounding area.  Through relationships with supportive service partners and other community connections, ACTION is able to offer individuals entry level positions—which they may otherwise not have access to—as well as functional support as they get started.  ACTION provides them not just with a job, but the possibility of advancement—even a career.  The brainchild of Mike Willemsen (President of Vecino Construction) and Heather Bradley-Geary, the program uses Section 3 compliance (HUD program to secure employment opportunities) as its base, and builds upon it by creating a support system—transportation, meals, even housing—to help ensure each participant’s success. Though still in its early stages, support can be and is provided via Vecino Supportive Services, Vecino Construction team, and partners.

“The initial thought was to provide more than just a short-term hourly position,” says Willemsen, as he stands near a stack of ACTION t-shirts, ready to hand to applicants. “As I had seen while hiring within Section 3 at previous firms, the worker often has a spark that—with a little nurturing—could lead to greater success, even a career. Here at Vecino, I knew that it might finally be possible to make something happen. It fits right into our ‘greater good’ ideal.”

In addition to Aya Tower in East Point, Vecino also recently held an ACTION event in the City of Cordele, Georgia as part of the construction effort for the Gillespie Gardens development. Gillespie Gardens is an adaptive reuse of four historic buildings in Cordele along with new construction creating 53 affordable housing units for individuals and families. It’s a collaborative effort between the Vecino Group, the City of Cordele, Blackshear Place Business & Events Center, and the St. Paul Presbyterian Church. “We had a good turn-out in Cordele, especially considering it’s more rural compared to the Atlanta area.” said Bradley-Geary.  In addition to Georgia, more ACTION hiring events are planned in the coming months for Vecino Group developments in both the Midwest and the Northeast.

It has been a good 15 minutes since Stan rounded the corner and out of sight, and the team is beginning to wonder if he had a change of heart. But, after just 5 minutes more the SUV does return to park right next to the ACTION table…but with an additional occupant inside: Robert.

“I ran home and got my son to see if he was interested—we’ll both sign up!”

And with the applications now done, new shirts provided and fist bumps all around, Stan and Robert are ready for ACTION on Aya Tower.